Stories from the sea

During the most prosperous period for coral fishing, in Alghero the Caixa del Corall, a Coral Bank was set up; this was a type of pension fund into which the coral fisherman deposited a certain quantity of red gold in preparation for their old age.

The fishermen paid a percentage at the end of each fishing campaign into this Coral bank which was reserved for coral fishermen only, who on reaching an advanced age could no longer support themselves by fishing.

In addition, funding for works of public interest was also drawn from the Caixa del Corall, including those for various chapels of the Cathedral of Santa Maria. 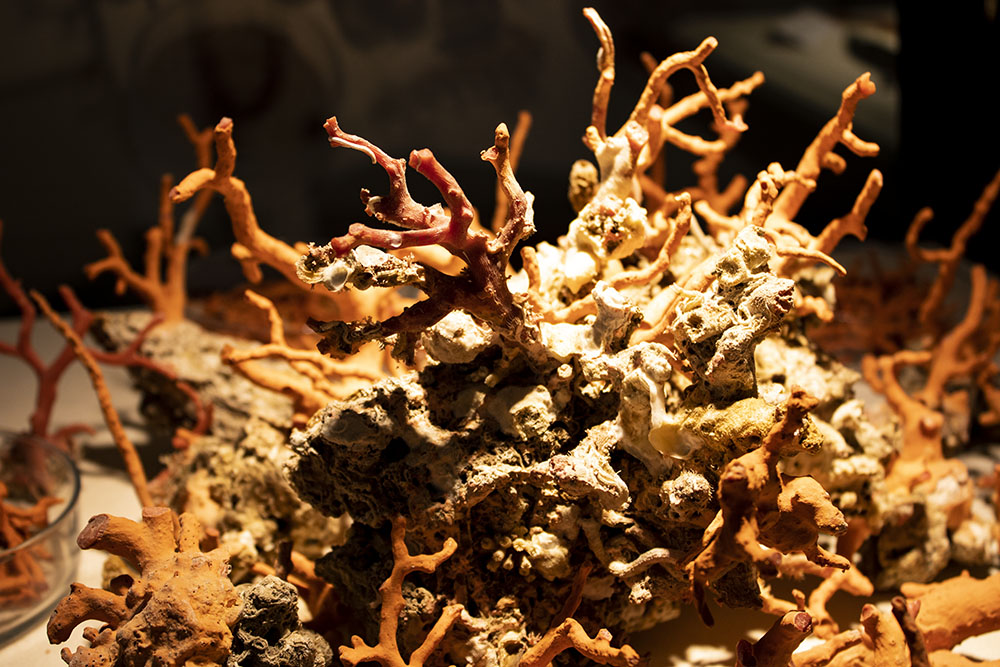 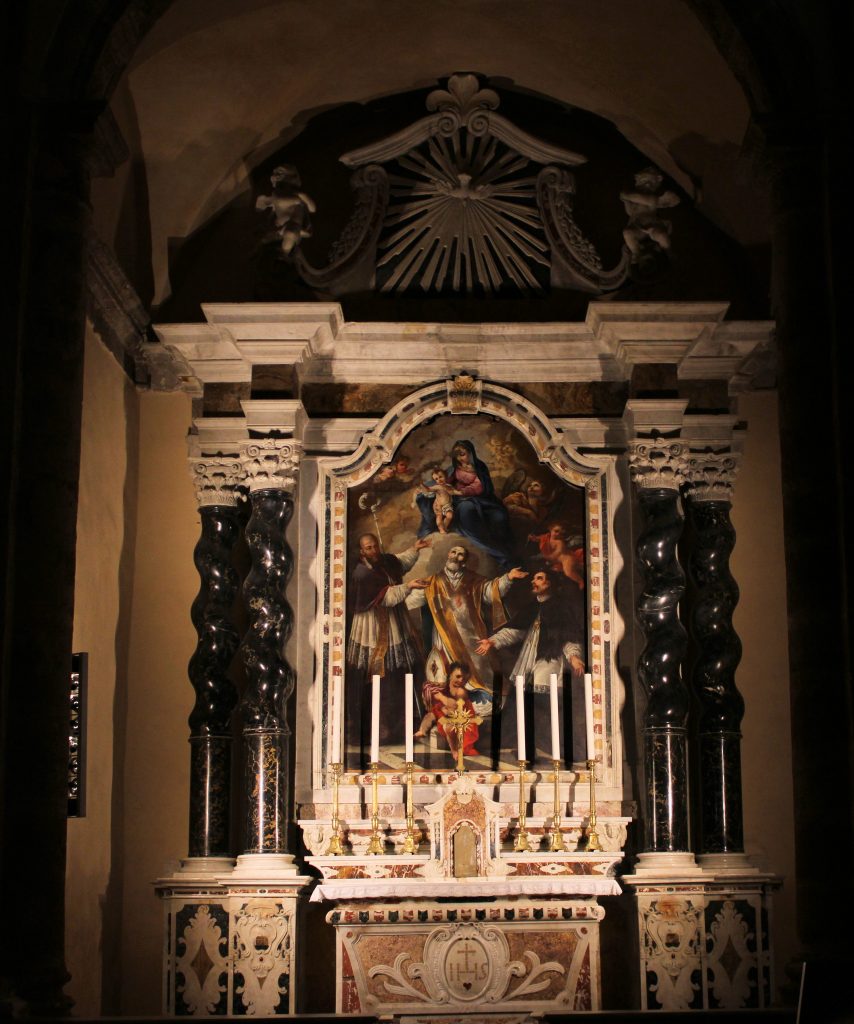 One such chapel was the 1608 Chapel of S. Filippo Neri, mentioned as ‘dels Carcassonas’, a noble family from Alghero with Israelite origins who had owned a chapel in the cathedral since 1574.

Historical sources say that around 1750, Bishop Carlo Francesco Casanova financed the construction of a new polychrome marble altar with an altarpiece depicting saints in veneration of the Madonna. The 'Coral Bank' gave a sum totalling "mil y cient escudos" for the work to be carried out.

Funding was also provided for the Chapel of the B.V. Annunziata. In 1572 the guild of tailors and shoemakers was authorised to commission a new marble altar. Erected in 1755, roughly 400 Sardinian scudi were paid, largely with funds from the Caixa del Corall.

Over the centuries, the Mediterranean Sea has proven to be a source of great wealth but also of great danger and its sailors have always sought protection from the Saints.

St Elmo, the patron saint of fishermen is present in the folklore of Alghero, so much so that a now ruined altar in the Grotta Verde at Capo Caccia, where mass was once celebrated, is dedicated to him. Some historical sources report the presence in the past of an ancient church dedicated to the saint, located in the street of the same name. In the cathedral, in a chapel in the aisle on the right, there is a painting depicting perhaps an ex voto, a boat in the midst of the storm and above, as if watching over the fishermen, the Madonna and St Erasmus.

When the fishermen decided to brave the sea’s dangers, they relied on both of these figures for comfort and protection. The bronze statue of the Madonna Stella Maris was placed on St Elmo’s tower in 1954 to supervise the boats and protect the sailors leaving the port of Alghero.

Not only that, in the city there are several simulacra of the patron saints that highlight the devotion that the people of Alghero have always maintained over the centuries.

In the old Porta a Mare, a niche was built to house the Madonna di Porto Salve, a small statue adorned with coral necklaces and revered by fishermen.

When the sea was too treacherous, the fishermen also relied on the Madonna del Frontuni, which was placed in the early 1900s in a cave on the sea at the end of Capo Caccia. The location was not chosen at random, since from that point the statue had to protect the fishermen who boldly ventured beyond the promontory. She is portrayed with a boat on her arm and an inscription at the base: Benedite e Pregate per gli Ardimentosi Navigatori (Bless and Pray for the Daring Sailors). 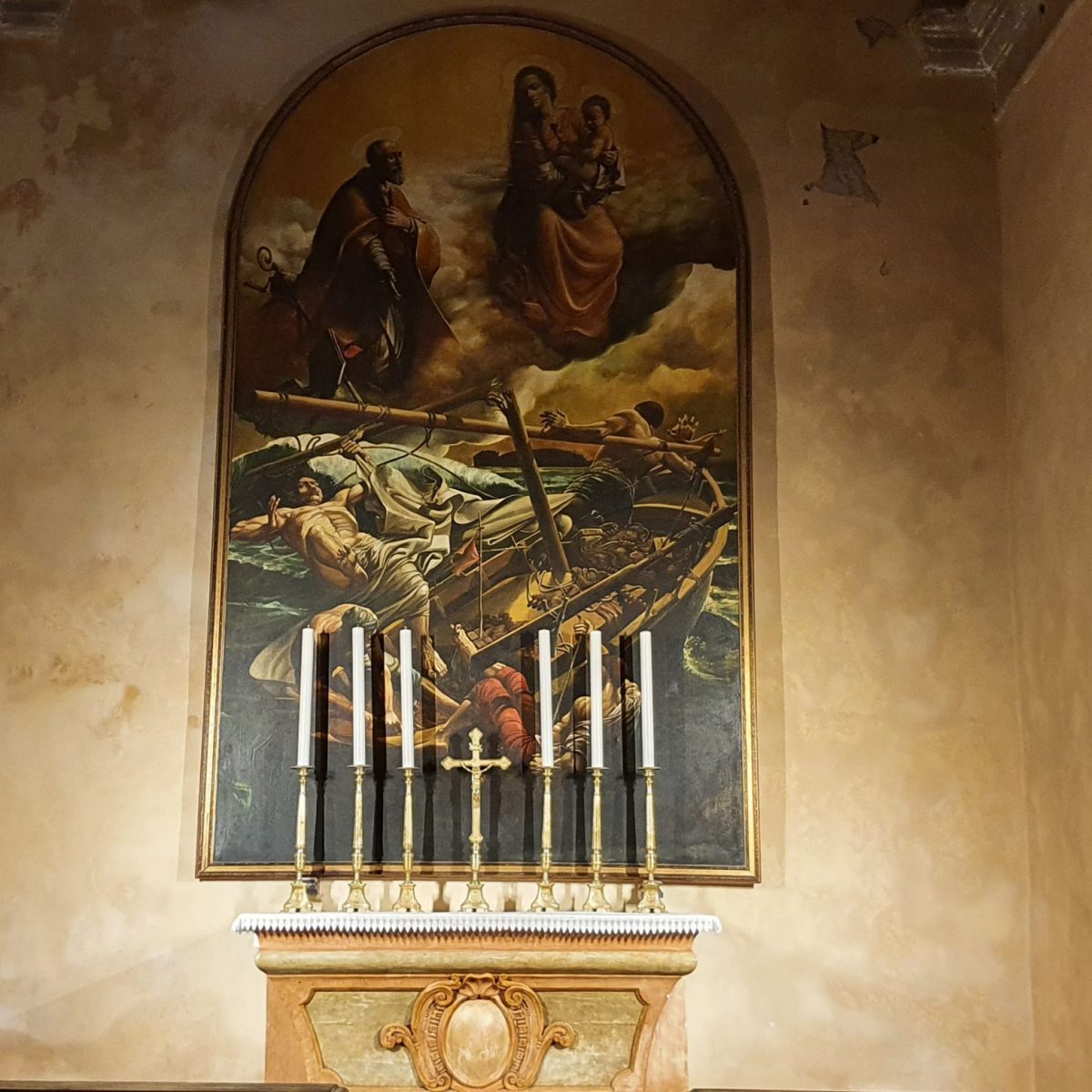 The Oratory of Our Lady of the Rosary (L’Oratorio di Nostra Signora del Rosario) belonged to the confraternity of the same name founded in 1568, in the church of San Francesco.

Here the members remained until 1661, when they opted to purchase two buildings overlooking Plaça Real, now called Piazza Civica. The two noble owners of the time, Don Francesco and Donna Anna Maria Sanna, by raising the buildings after having demolished the floors, converted them into the oratory as it appears in its current guise.

The extremely devoted coral fishermen are said to have offered up prayers to the Madonna every time they went out to sea.

The oral history of the people also tells that the church was very popular with the families of seafarers, especially on the patron saint's day which coincided with the end of the fishing season and with the return of the fishermen to their hometowns.

On this occasion the coral fishermen gave thanks to the Madonna del Rosario by offering coral branches as a sign of gratitude in line with how propitious the season had been.

The Oratory was closed for worship in 1959, as it was deemed structurally unsafe and it now houses the Diocesan Museum of Sacred Art.

In the museum collection we find the Madonna dei Naviganti, a simulacrum revered by the fishermen of the guild of St Erasmus. This wooden piece from the late Gothic period, by the skilled hand of a Catalan master, is the oldest in the exhibition.

In all probability it was originally placed on the altar of the chapel of Nostra Senyora dels Navegants, in the cathedral (now Cappella di San Filippo Neri), also called Dels Carcassonas, from the name of the Algherese family line of converted Jews under whose patronage it was held from the end of the sixteenth century until the first half of the following century. 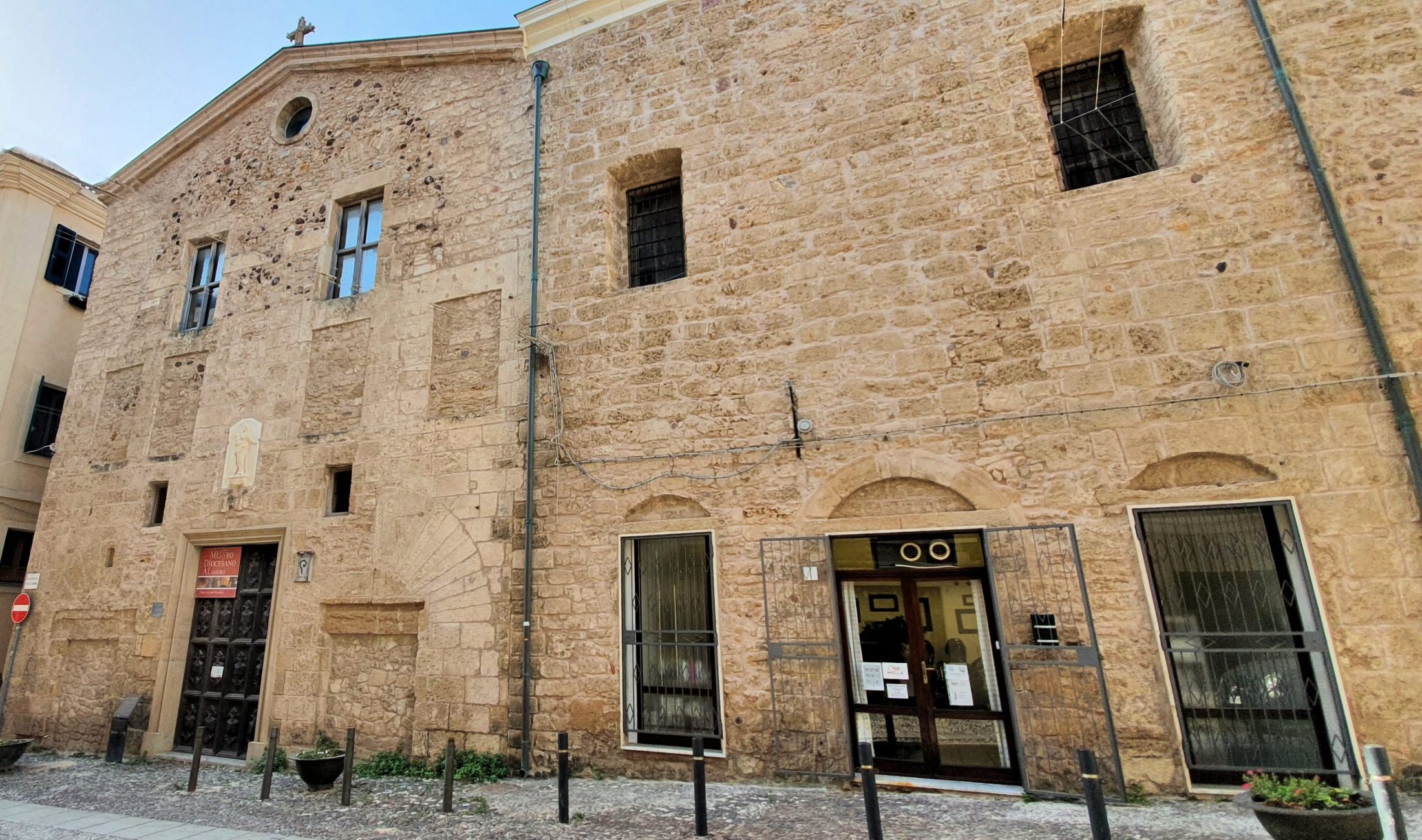 With the bull Augustissimam coeli Reginam, of 25 March 1949, Pius XII proclaimed Nostra Senyora de Vallverd, Our Lady of Valverde whose feast day is May 26th, co-patron of the city and of the diocese.

The devotion of Alghero’s citizens to the Madonna di Valverde is very much alive, in fact, numerous popular tales and songs are dedicated to her.

The history of this devotion is difficult to fully understand, as over the centuries it has been etched into the memory and interwoven into the secrets of the people of Alghero, and its retelling is enriched with legendary facts and episodes.

In the 33-cm-tall figurine, the Madonna holds the Infant Jesus in her left arm.

According to some tales, the work is said to have been modelled from clay dried in the heat of the sun, while others claim that the material used is the earth bathed in the blood of the martyrs. It is Romanesque in style and can be dated from the eighth to the tenth century, although local folklore dates it even further back.

In any case, the people’s devotion remains steadfast; in times of need as well as the constant dangers of the sea, they have always turned to the Madonna di Valverde, to seek grace, help or comfort.

For centuries, thousands of pilgrims have travelled daily, on foot and through prayer, the seven kilometres that separate Alghero from Valverde; others made their way along the paths which, winding through the countryside and woods, from Villanova Monteleone or Putifigari, lead to the Sanctuary. 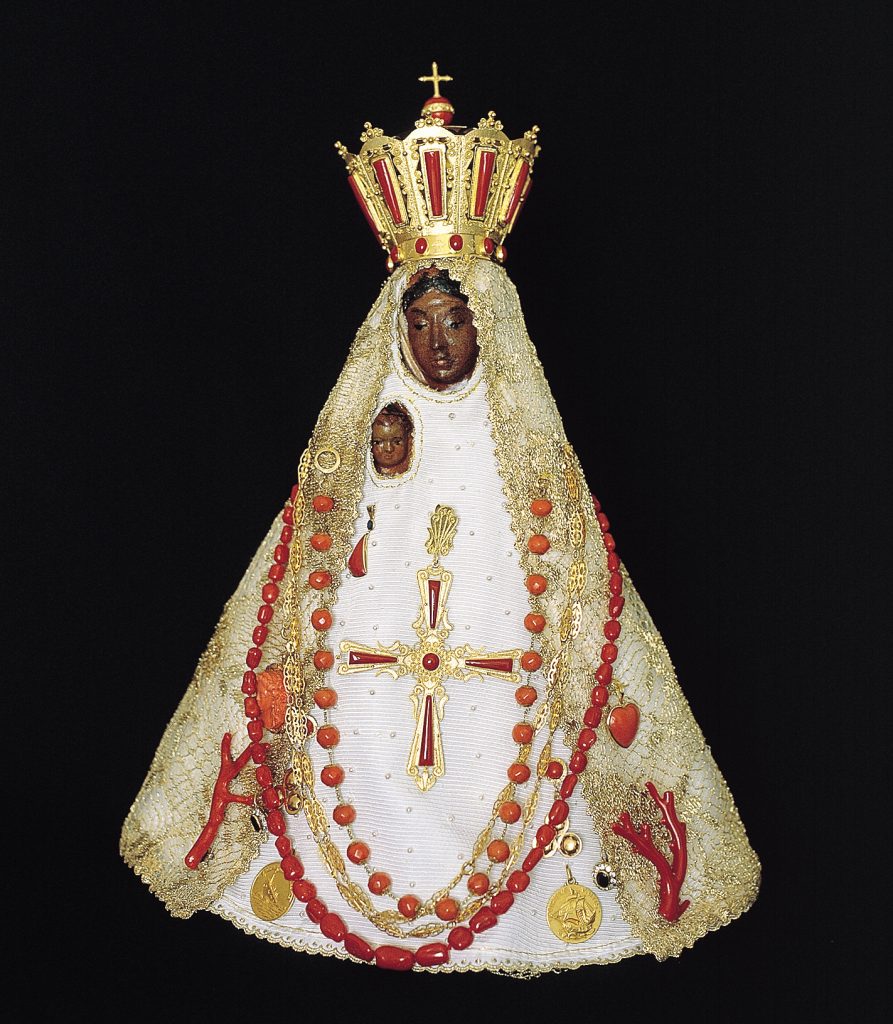 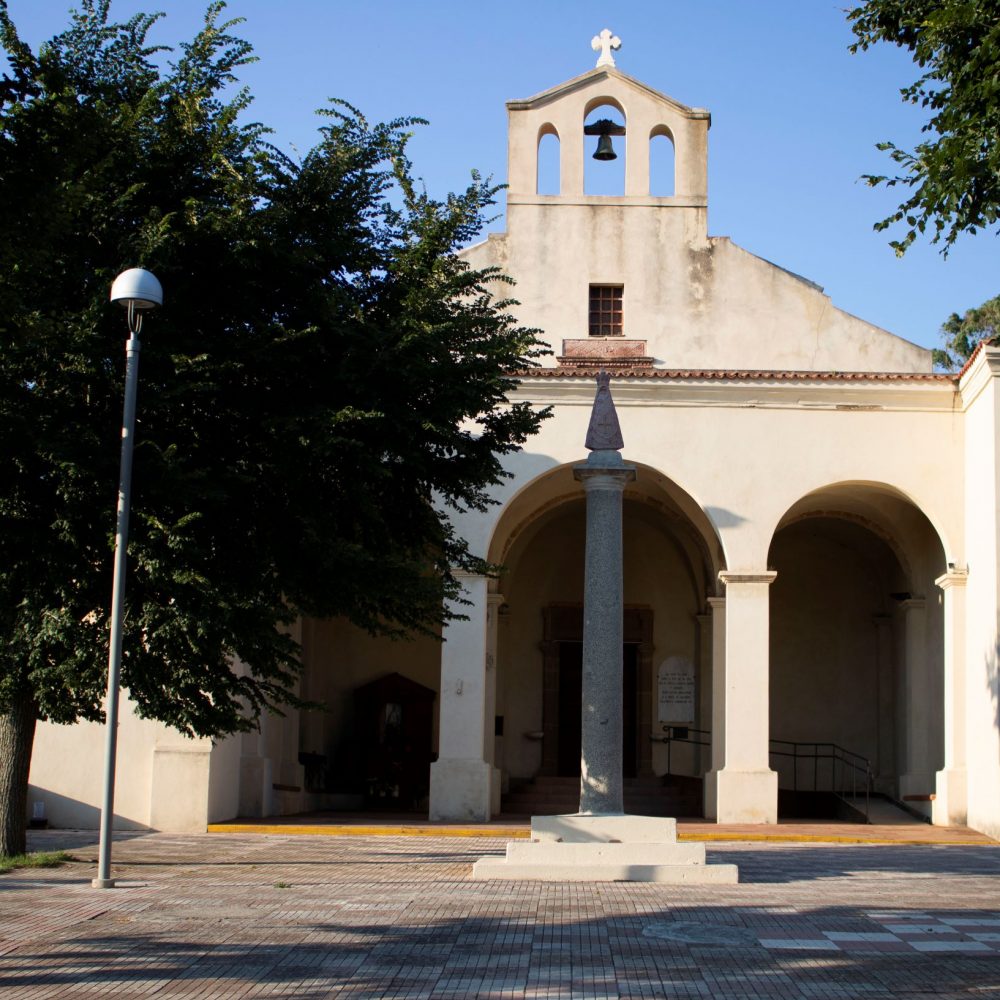 The Madonna di Valverde has worn various crowns, all precious and priceless. The first, from reliable historical sources, dates from 1698 made of solid gold thanks to ex-votos from the faithful, while the most recent was given to the Madonna on May 26, 2002 in a solemn ceremony. The precious ornament was always made from the small objects donated by the devoted, embellished with coral, the city’s emblem, which however was strangely absent in the various crowns that have been donated over the centuries.

Between the sixteenth and eighteenth centuries the popular tradition of ex votos spread becoming a means of, sometimes elementary but always very communicative, pictorial expression in which the faithful portrayed their devotion and gratitude.

These paintings are a testament to the faith, and also a snapshot of the singular and unique episodes of the life of the people of Alghero. They translate tangibly the needs of the people, the hopes and graces obtained and in some cases tell of miracles.

Following the recent restorations by the Superintendency, the various ex votos have been categorised into topics: some depict the graces of the sea, those of the countryside, healings, protection from misfortunes, the return from war. The most significant are displayed on the walls of the side chapels of the sanctuary, others, however, have found a permanent home in the Museum of the Valverde Sanctuary at the behest of Don Nughes.